Final Regulations on Bonus Depreciation from IRS and Impact for Dealerships 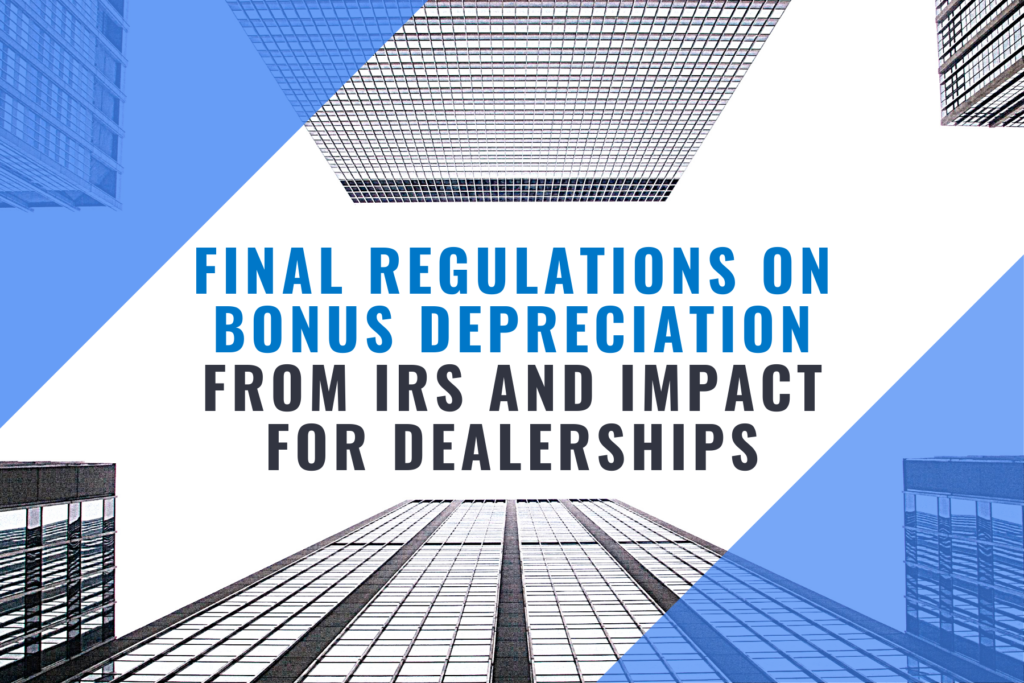 The last set of final regulations from the IRS to implement the 100 percent additional first-year depreciation deduction, or bonus, was released in late September 2020 and clarified some final items, including some advantageous for auto dealerships.

Bonus depreciation, which allows businesses to accelerate their tax deductions on the depreciation of business fixed assets has been in existence since 2010 in one form or another. As part of the Tax Cuts and Jobs Act (TCJA) in late 2017, the rules were adjusted and improved favorably for businesses. 100% bonus depreciation was put into place through December 31, 2022, followed by a downward sliding scale of 20% each year through the end of 2026.

A new limitation was also included in the TCJA regarding business interest expense and partial deductibility based on formulas tied to taxable income. Proponents for auto dealerships, especially NADA, lobbied that floorplan interest is an ordinary expense of a dealership and that it shouldn’t be limited. As a trade-off, the TCJA deemed any businesses with floorplan interest to be ineligible for bonus depreciation, and floorplan interest was not to be considered in the interest limitation calculations.

Unfortunately, starting in 2022, the addback of depreciation/amortization expense from the above calculation will no longer be applicable. If the business has goodwill amortization for example, and lower income, interest expense may be limited and carried over into the subsequent year. Bonus depreciation would be somewhat circular in these calculations to determine whether it can be taken or not, when combined with floorplan interest limitations. There is already commentary to have this portion of the TCJA be amended and ease up on these deducibility restrictions.

The other takeaway we want to note from the final regulations relates to qualified improvement property (QIP). These types of property are defined as any interior non-structural improvements made on non-residential buildings already in service. These would include many items installed as part of a remodel, such as new windows, interior doors, ceilings, electrical and mechanical, etc. When the TCJA was first enacted in late 2017, due to a technical error, these types of improvements were unintentionally omitted and were defaulted to 39 year property, not eligible for bonus depreciation.  The CARES act fixed this error and made these properties 15 year life and subject to bonus depreciation. These final regulations amended the definitions slightly to say the taxpayer must have made the improvements and applies to property placed in service on or after January 1, 2018. What this means is that the QIP must have been produced or constructed either by the taxpayer or on their behalf by a third party (such as a contractor).  For example, on a dealership the taxpayer purchased, even if the seller had done a remodel which created QIP, that property was placed in service by the seller, not the taxpayer/buyer, and now would be subject to the longer depreciable lives in the taxpayer’s hands.

The TCJA did include a favorable tax position that expanded the applicability of purchased property that was already in service, or considered used property, such as a pre-existing building, to be eligible for bonus depreciation, which was not the case before. If a cost segregation study is then performed, the building could be identified into components ranging from 5 to 15 year lives, all bonus depreciation applicable, and the remaining 39 year lives. We do suggest that real estate be purchased in a separate legal entity outside the operating dealership entity. Then the floorplan interest limitations above would not apply.

In summary, all aspects of bonus depreciation and how to implement have been issued by the IRS through a series of proposed and final regulations over the last two years. The takeaway from this whitepaper is to plan accordingly when it comes to fixed asset purchases at the operational dealership entity, such as lifts, furniture, etc., and the same in the case of real property purchases or remodels to existing in-service buildings to ensure that all depreciation expense is maximized.